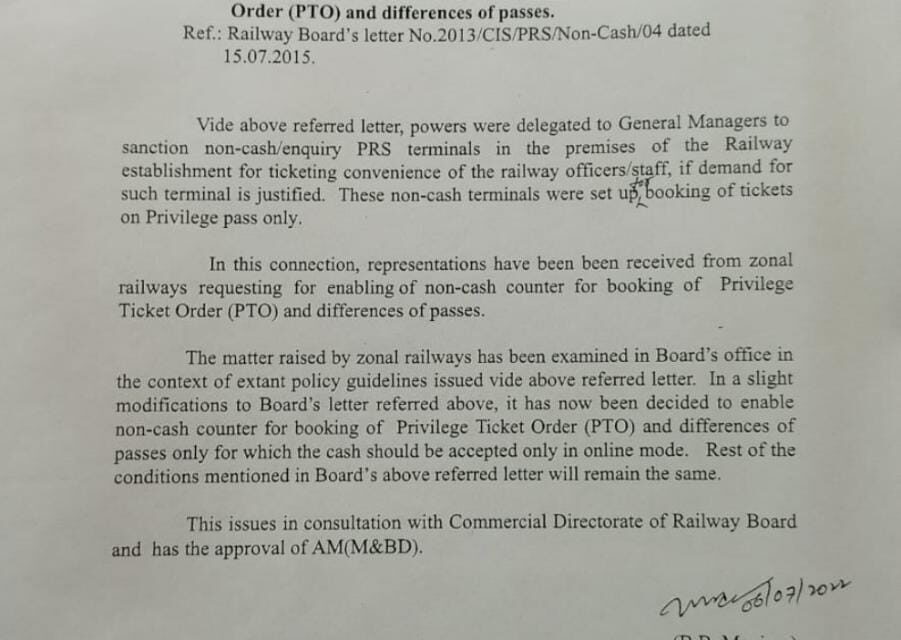 The General Managers, All Zonal Railways

Sub.: Enabling of non-cash counter for booking of Privilege Ticket Order (PTO) and differences of passes.

Vide above referred letter, powers were delegated to General Managers to sanction non-cash/enquiry PRS terminals in the premises of the Railway establishment for ticketing convenience of the railway officers/staff, if demand for such terminal is justified. These non-cash terminals were set up booking of tickets on Privilege pass only.

In this connection, representations have been been received from zonal railways requesting for enabling of non-cash counter for booking of Privilege Ticket Order (PTO) and differences of passes.

The matter raised by zonal railways has been examined in Board’s office in the context of extant policy guidelines issued vide above referred letter. In a slight modifications to Board’s letter referred above, it has now been decided to enable non-cash counter for booking of Privilege Ticket Order (PTO) and differences of passes only for which the cash should be accepted only in online mode. Rest of the conditions mentioned in Board’s above referred letter will remain the same.

This issues in consultation with Commercial Directorate of Railway Board and has the approval of AM(M&BD).